Glial fibrillary acidic protein (GFAP) is a classic marker for astrocytes, including the astrocytic neural progenitors. It is an intermediate filament protein and the canonical form is GFAP-α. Other isoforms that have been described are β, γ and, recently, κ. Our group has identified four novel splice variants of GFAP: Δ135, Δ164, Δexon 6 and δ.

GFAPδ expression in glia of the developmental and adolescent mouse brain 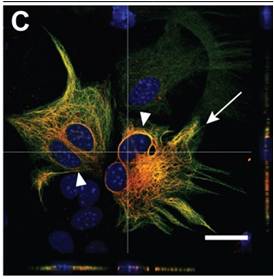 Glial fibrillary acidic protein (GFAP) is the major intermediate filament (IF) protein in astrocytes. In the human brain, GFAP isoforms have unique expression patterns, which indicate that they play distinct functional roles. One isoform, GFAPδ, is expressed by proliferative radial glia in the developing human brain. In the adult human, GFAPδ is a marker for neural stem cells. However, it is unknown whether GFAPδ marks the same population of radial glia and astrocytes in the developing mouse brain as it does in the developing human brain. This study characterizes the expression pattern of GFAPδ throughout mouse embryogenesis and into adolescence. Gfapδ transcripts are expressed from E12, but immunohistochemistry shows GFAPδ staining only from E18. This finding suggests a translational uncoupling. GFAPδ expression increases from E18 to P5 and then decreases until its expression plateaus around P25. During development, GFAPδ is expressed by radial glia, as denoted by the co-expression of markers like vimentin and nestin. GFAPδ is also expressed in other astrocytic populations during development. A similar pattern is observed in the adolescent mouse, where GFAPδ marks both neural stem cells and mature astrocytes. Interestingly, the Gfapδ/Gfapα transcript ratio remains stable throughout development as well as in primary astrocyte and neurosphere cultures. These data suggest that all astroglia cells in the developing and adolescent mouse brain express GFAPδ, regardless of their neurogenic capabilities. GFAPδ may be an integral component of all mouse astrocytes, but it is not a specific neural stem cell marker in mice as it is in humans. Mamber et al. PLoS One 2012 7(12)e52659. 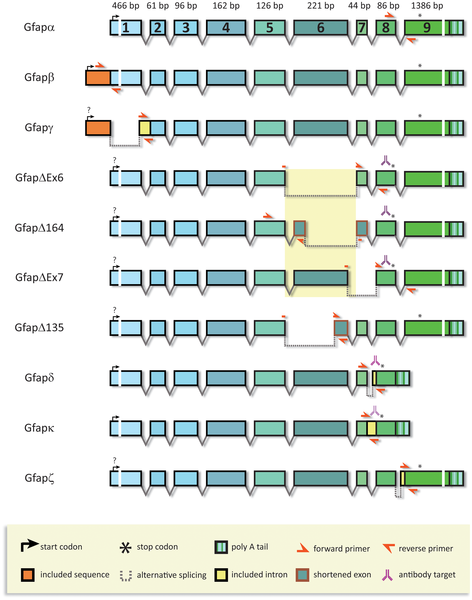 Glial fibrillary acidic protein (GFAP) is the main astrocytic intermediate filament (IF). GFAP splice isoforms show differential expression patterns in the human brain. GFAPδ is preferentially expressed by neurogenic astrocytes in the subventricular zone (SVZ), whereas GFAP(+1) is found in a subset of astrocytes throughout the brain. In addition, the expression of these isoforms in human brain material of epilepsy, Alzheimer and glioma patients has been reported. Here, for the first time, we present a comprehensive study of GFAP isoform expression in both wild-type and Alzheimer Disease (AD) mouse models. In cortex, cerebellum, and striatum of wild-type mice, transcripts for Gfap-α, Gfap-β, Gfap-γ, Gfap-δ, Gfap-κ, and a newly identified isoform Gfap-ζ, were detected. Their relative expression levels were similar in all regions studied. GFAPα showed a widespread expression whilst GFAPδ distribution was prominent in the SVZ, rostral migratory stream (RMS), neurogenic astrocytes of the subgranular zone (SGZ), and subpial astrocytes. In contrast to the human SVZ, we could not establish an unambiguous GFAPδ localization in proliferating cells of the mouse SVZ. In APPswePS1dE9 and 3xTgAD mice, plaque-associated reactive astrocytes had increased transcript levels of all detectable GFAP isoforms and low levels of a new GFAP isoform, Gfap-ΔEx7. Reactive astrocytes in AD mice showed enhanced GFAPα and GFAPδ immunolabeling, less frequently increased vimentin and nestin, but no GFAPκ or GFAP(+1) staining. In conclusion, GFAPδ protein is present in SVZ, RMS, and neurogenic astrocytes of the SGZ, but also outside neurogenic niches. Furthermore, differential GFAP isoform expression is not linked with aging or reactive gliosis. This evidence points to the conclusion that differential regulation of GFAP isoforms is not involved in the reorganization of the IF network in reactive gliosis or in neurogenesis in the mouse brain. Kamphuis et al. PLoS One 2012 7(12)e42823.